Both BJP & Congress have launched election manifesto websites soliciting ideas/suggestions for the 2014 elections. BJP’s website has pics of Modi, Singh & Joshi with links to their 2009, 2004 & 1998 elections manifesto. There is also links to their social media profiles on Twitter, Facebook, Youtube & Google+. Both the parties have taken to internet & social media to reach to the public & connect with them. A Manifesto is a public declaration of intent.

While Congress has pics of Singh, Sonia & Rahul on the website with links to their Facebook & Twitter profiles. Suggestions can be given pertaining to various areas & also for a particular state. There is also links to various reports of the past year’s UPA govt’s report card. A twitter feed has also been included in the site. 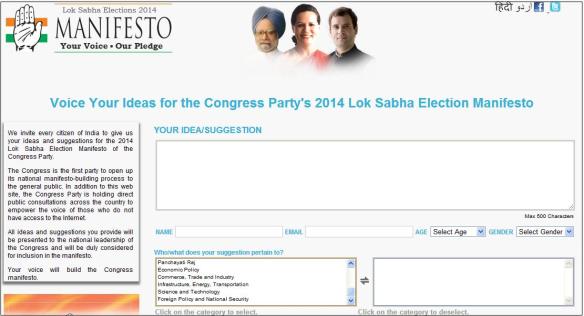